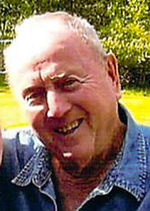 Samuel “Sam” Seymour, 100, of Norwich, passed away after a brief illness on Thursday, September 12, 2019 at Valley View Manor Nursing Home.

Born on May 4, 1919, in Peekskill, NY, Sam was the son of Samuel and Elizabeth (Horton) Seymour. He grew up and went to school in Cold Spring, NY, then began work in a nearby stone quarry. In 1942, Sam enlisted with the U.S. Army and served during WWII in the European theater, including his involvement at Omaha Beach and the liberation of France. He also saw the deplorable aftermath of the concentration camps. Sam was also a recipient of the Purple Heart. After the German surrender in 1945, Sam was honorably discharged.

After the war, Sam worked odd jobs until he found work at Camp Smith, in Peekskill, working on heavy machinery of the National Guard unit there. He earned a diesel engine repair degree and became a motorpool master sergeant. Sam also earned his GED. His brilliant blue eyes led him to be known as “Sergeant Blue Eyes.” Sam also served in the Army National Guard for many, many years after the war and loved to bring his kids to Camp Smith and let them play on the large Army vehicles. Sam was also an avid outdoorsman, and taught his kids to appreciate the outdoors, too. He enjoyed fly fishing at Livingston Manor, hunting, and boating. He was fond of taking his kids on his Boston Whaler along Chenango Lake and water-skiing there. He was a talented wood-worker, and had a wood-working shop at his home. He also loved to ride motorcyles and rode dirt bikes up to the age of 65.

Contributions in Sam’s memory may be made to the American Legion Post 189, 29 Sheldon Street, Norwich, NY 13815.

All rights reserved. This obituary is also archived at obittree.com