Obituary for Mary A O'Neil 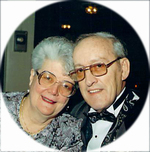 Mary Agnes O’Neil, 85, a longtime resident of Norwich, passed away on Wednesday, August 22, 2018, at Our Lady of Lourdes Hospital in Binghamton with family by her side.

Born on September 19, 1932, in Endicott, Mary was the daughter of Carl and Marjorie (Colgrove) Fern. She moved to Norwich with her family as a young girl where she attended St. Paul’s School. In her youth, she enjoyed time at Oneida Lake with her Aunt and Uncle Rita and Max Fern. She graduated from Norwich High School with the Class of 1949.

Mary worked as a telephone operator in her teens and as a bank teller for the National Bank and Trust Company of Norwich. After raising her children, Mary worked with her mother Marjorie Fern at St. Paul’s School Cafeteria for over 25 years. They also volunteered for Friday Fish dinners during Lent. She enjoyed cooking, for family as well as bake sales.

She enjoyed camping, which she carried on into her adulthood and shared with her family. Mary and her husband, John, provided their children with camping vacations to Bowman Lake, Ithaca, Canada, and throughout the New England states. Time was spent each summer in the Adirondacks at cottages on Fourth Lake, and in later years camping at Meechum Lake. Mary also enjoyed trips to Branson, MO, and Myrtle Beach, SC, with her best friend, Margaret. She loved celebrating holidays gathered with family. Mary was an avid fan of the New York Giants and Boston Red Sox.

Mary was a communicant and active member of St. Paul’s Church and a member of the Altar Rosary Society. She was also active in the community as a Cub Scout Den Leader and Inspector for the Board of Elections.

Mary’s Family would like to thank Marie Dykstra for providing Communion each week and keeping her informed about her Parish family. Mary’s Lourdes Hospital Ostomy Support Group helped her feel like she was not alone after her colorectal cancer and ostomy in July 2012. Thanks to Mary’s Ostomy Care nurses, Karen Brown and Caroline Nielands, who were great sources of support for her over the years. Her final year was filled with many health challenges with so many to thank. Dr. Basit Achakzai and the doctors and staff at Guthrie Interventional Radiology were extremely helpful in diagnosing and initially treating her liver bile duct issues. Heartfelt thanks to Broome Oncology at Lourdes with Dr. Johnathon Kloss, Kim Merrill NP, and the many nurses and care staff that gave her great care and compassion as she underwent chemotherapy for the past four months. They were always concerned with what was best for Mary. Special thanks to the doctors, nurses, aides, and all of her care staff on 1 Ross-Inpatient Oncology at Lourdes who helped Mary approach her final days with comfort, dignity, and love. Their love and comfort extended to Mary’s Family that was at her side to the end. Alycia Bensley, NP, at Lourdes Palliative Care was very much appreciated for her support and efforts to make Mary and her family as comfortable as possible.

A Mass of Christian Burial for Mary was celebrated at 10:00 a.m. on Monday, August 27, 2018 at St. Paul’s Church, where Rev. Ralph A. Bove, pastor, officiated. Burial followed at St. Paul’s Cemetery. Contributions in Mary’s memory are encouraged to the cancer charity of their choice, or to Norwich School’s Weekend Food Backpack Program. To leave the family a message of condolence, please visit: www.wilsonfh.com.

To send flowers to the family or plant a tree in memory of Mary A O'Neil, please visit our Heartfelt Sympathies Store.