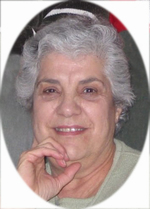 Rosemary Veronica Abbott Brown, 88, of Norwich, known by her many friends as “Rosie,” passed away on Sunday, June 24, 2018 at Chenango Memorial Hospital’s Residential Health Care Facility with her loving family by her side.

The “land of her birth,” Detroit, MI, Rosemary was the daughter of Joseph and Fannie (Harp) Abbott and was the oldest of their six children. She and her siblings were raised in Sherburne, NY. The Abbott family made their living in the restaurant business, operating small establishments with a hint of Lebanese flavoring in both Sherburne and Earlville. The Abbott family was at the center of a very close-knit Lebanese community in Sherburne, which has continued to grow and expand into Norwich, Utica, and beyond. Rosemary was a 1948 graduate of Sherburne High School, where she was voted Class Clown. Humor was always a big part of Rosemary’s life. In fact, spending any time with Rosemary and her family always included funny stories, sarcastic barbs, and hardy belly laughs. Time spent with Rosemary and her siblings, Winnie, Fred, Judy, Ann, and Anthony was memorable indeed.

After graduation, Rosemary worked at the Utica Knitting Mill, in Sherburne, and Rome Air Force Base, in Rome. At one time she made custom draperies for homes and businesses in the Norwich area.

Rosemary married the one and only love of her life, Gordon Brown, in 1955. They raised five children together in Norwich and instilled in them the importance of family, humor, and community involvement. The bulk of Rosie’s work outside her home was spent as a bookkeeper/secretary at St. Paul’s Church, in Norwich. While she retired after 30-plus years with the church, she maintained her commitment both as an active parishioner and volunteer until her passing. Among other community involvement activities, Rosie spent many years as a member of the St. Paul’s Mother’s Club, while her children attended St. Paul’s School, including two years as its president, past president of the Norwich High School Football Booster Club and a member of the Plymouth Reservoir Lot Owner’s Association. Rosie very much enjoyed volunteering her time at the Norwich YMCA. In 2009, Rosie was recognized as a YMCA Volunteer of the Year and could have been recognized for ten consecutive years. She was also an avid supporter of Norwich High School athletics. She and her friends would routinely attend basketball and football games to root on the Purple Tornado. Rosie was fortunate enough to see her children, grandchildren, and great grandchildren participate in a variety of sporting events and extracurricular activities.

Rosie loved spending summers in her home on the Plymouth Reservoir, where her neighbors became family. She always looked forward to the 3rd of July festivities and fireworks, and times when the family would gather and enjoy themselves. Rosie was also blessed with many, many friends with whom she stayed in touch for many, many years. Once a person became Rosie’s friend, she was their friend for life. Her family is especially grateful to all of her friends and family for reaching out to Rosie via personal visits, phone calls, and written correspondence during her short hospital stay.

Rosie’s spirit joined not only the spirit of her husband, Gordon, who died on February 7, 1989, far too young to enjoy the growing families of the children, but also our angel, her granddaughter, Krissie Collier, who died in 2011. Rest assured her children, grandchildren, and “greats” were her pride and joy, and always will be.

A Mass of Christian Burial for Rosemary will be celebrated at 10:00 a.m. on Monday, July 2, 2018, at St. Paul’s Church, where Rev. Ralph A. Bove, pastor, and Rev. Donald Karlen will co-officiate. Burial will immediately follow at St. Paul’s Cemetery. Friends are invited to call at the Wilson Funeral Home on Sunday, July 1, from 3:00 – 6:00 p.m. Contributions in Rosie’s memory may be made to the Norwich YMCA Open Doors Scholarship, 68 N. Broad St., Norwich, NY .

To send flowers to the family or plant a tree in memory of Rosemary V. "Rosie" Brown (Abbott), please visit our Heartfelt Sympathies Store.