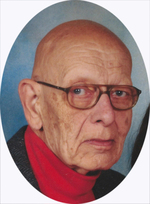 Born November 7, 1934, in Cortland, NY, William (Bill) was the son of Ralph Hill and Dorothy Chadwick (Beebe) Dudley. Bill was a graduate of Ithaca High School and, after high school, graduated from the Cornell University’s Johnson School of Management.

Bill was a partner with the Syracuse accounting firms of Gilfoil & McNeil and Ernst & Ernst. In 1981, he moved to Norwich, NY, where he was an officer with NBT Bank. Bill subsequently opened a private accounting office.

Bill was a dedicated Christian and Mason who was active in his local church and community. He led Baptist youth groups, was a member of the choir, and conducted prison outreach. He volunteered his accounting skills to the Rescue Mission of Syracuse and help found the Rainbows End Coffee House and The Place teen outreach programs in Norwich. He was an avid golfer, bridge player, folk guitarist, and loved a warm Christmas cookie.

Friends are invited to call at the Wilson Funeral Home from 11:00 a.m. to 1:00 p.m. on Wednesday January 6, 2016. A private funeral service for the family will be held at the funeral home, where Rev. David Spiegel, pastor, will officiate. A private burial will follow at Mt. Hope Cemetery.

Contributions in William’s memory may be made to the Syracuse Rescue Mission or Chenango County United Way.

To send flowers to the family or plant a tree in memory of William H. Dudley, please visit our Heartfelt Sympathies Store.